I’ve started watching season two and it’s growing on me. 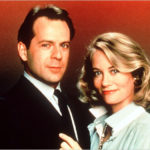 I was discussing the famous “You don’t have a square to spare?” Seinfeld episode, which led me to recall an episode of Moonlighting.  The mere prat of a youth with whom I was speaking had never heard of the show or seen Bruce Willis with hair. Thus, I present this for his (and your) edification and enjoyment.

Before I watched the US version of House of Cards on Netflix, I watched the British version*. The arcs of the first two seasons  were similar, similar enough that I feared how the American season 3 would end.

Underwood’s first season was a slam-bang ride, a politicial thriller with wit and Shakespearean undertones (as well as Richard III asides).  The second season lost some of the first season’s power, but kept me binging on into Season 3.  I wanted to love it; I was not impressed by the arc of season 3 and its finale.  The British version made a definite statement about the absolutes of ambition, loyalty and love: What would Elizabeth do for Francis? The American version swung into a predictable domestic drama: What does Claire want?.

* The British version appeared as three separate series, House of Cards, To Play The King, and The Final Cut. Justified, an oral history from Fire In The Hole forward (thanks to @moryan for the link)
http://uproxx.com/tv/2015/01/justified-oral-history/

What would the US have been like if we’d lost World War II? Philip K. Dick imagined it and now X-Files creator Frank Spotnitz is bringing it to Amazon Prime.

Woody Allen signed to do a TV series on Amazon Prime.
http://www.nytimes.com/2015/01/14/business/amazon-signs-woody-allen-to-write-and-direct-tv-series.html

Find me on Mastodon